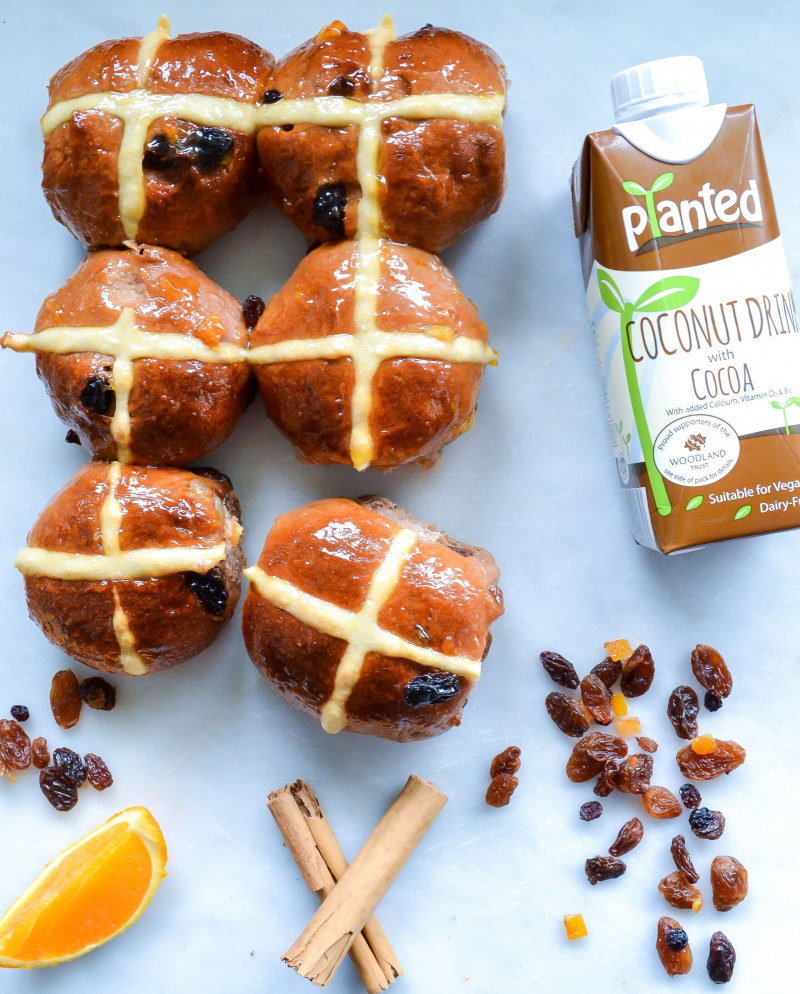 To make your own homemade vegan hot cross buns you will need:

1. To kick off the vegan hot cross bun recipe, put the flour, sugar, salt and yeast into a large mixing bowl. Gently heat the coconut drink until it’s hand temperature and add this to the dry ingredients, along with the oil and apple puree. Mix with a wooden spoon until it starts to combine and then use your hands to form the mixture into a dough.

NOTE: My dough was really quite sticky (possibly too sticky) at this point, so you might want to keep back a little bit of the liquid and only add it in if you need to.

2. Flour your work surface well, and then knead for around five minutes. Pop your dough into a greased bowl, cover with a clean tea towel and leave it somewhere warm for an hour or until it has roughly doubled in size.

3. After an hour, keeping the dough in the bowl, add the orange zest, cinnamon and dried fruit and knead until everything is well combined. Pop the tea towel back on and leave for another hour.

4. Now it’s time to make the bun shapes. Split the dough into 12 pieces, and form each one into a nice round ball. You can weigh them to make them equal sizes if you want to, but this isn’t The Bake Off and quite frankly I don’t have time for this kind of thing. Place the balls on a lined baking sheet, leaving space for them to grow a little bit, and stick them back under the tea towel for a final hour.

5. Preheat the oven to 220 (200 fan). In a small bowl, mix the flour for the crosses with a little of the water at a time until you have a thick paste. Use a piping bag to pipe crosses onto the buns and then bake them in the middle of the oven for about 20 minutes.

6. When your vegan hot cross buns have finished in the oven, take them out and leave to cool just for a couple of minutes while you heat the apricot jam gently until it’s runny.

7. Brush the warm jam over your plump buns (not a euphemism) and leave your glossy hot cross buns to cool.