Why Your Diet Affects Your Mental Health

It’s very well known that what we eat affects our physical health in all sorts of ways, such as our heart health, our weight, cholesterol levels and skin to name but a few, but what is less known is that what we eat directly affects our mental health too. With Mental Health Awareness week taking place this month (10-16th May), what better time to highlight the importance of diet and food in relation to mental health. The foods we eat impact our mood, our feelings our ‘get up and go’ and our thought processes. As the saying goes ‘the foods we eat can either be the best form of medicine, or the slowest form of poison’ and our health, both physical and mental health, is only going to be as good as the fuel we feed our bodies with.

So how exactly does our diet and the foods we choose to eat directly impact our mental health?

Although the relationship between food, diet and mental health is a complex one, we know that food affects the brain which, like most organs, works full time 24/7 with no breaks. What allows it to do this? Fuel, and that fuel comes from the food we eat. The type of fuel we put into our bodies is therefore vitally important, because if we want to ensure our brain is firing on all cylinders, we need to make sure that the fuel it is run on is healthy, good quality and possesses all the vital nutrients it needs to do its job properly.  If the fuel we put in is rubbish and of the wrong ‘non-premium’ type, much like a car filled with the wrong fuel, it either won’t start at all, or its performance and capability is severely impaired. Therefore meaning your body’s engine, your brain, will suffer and that means your mental health will suffer.

So to understand why mental health is impacted by food and diet, we need to get a bit science-y first. Our brain and spinal cord make up our central nervous system, known as ‘central’ because these two body parts combines information from the entire body and then coordinates and organises activity across the whole organism.  The way our body sends messages via the nervous system is through chemical messengers called neurotransmitters, these include, but not limited to, serotonin, dopamine and adrenaline, which you are likely to have heard of before. Well science now realises that the foods we eat and the nutrients within them have a direct impact on our neurotransmitters and can affect the production, frequency and balance of them in the body. When these are affected our mood, thoughts and feelings are also affected and this means our mental health. 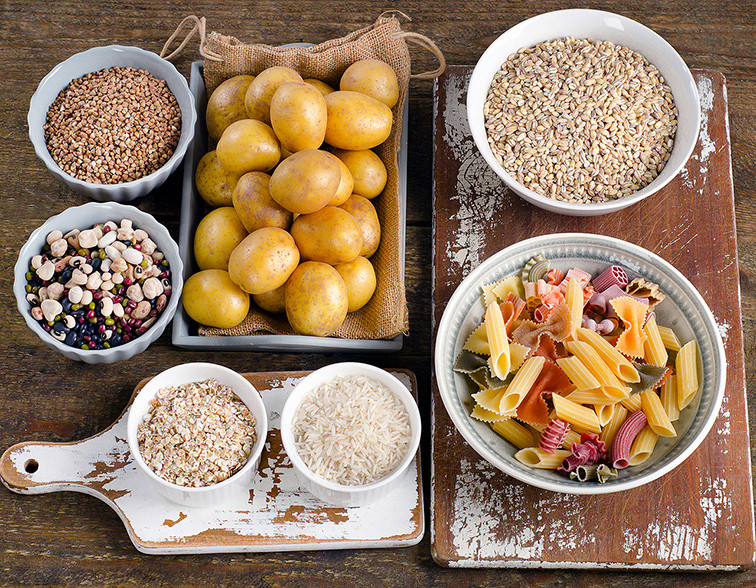 Different neurotransmitters do different jobs and have different effects in the body. One of the main neurotransmitters associated with mood is serotonin, so if serotonin levels are low then this means your mood can be too. Research shows that high levels of serotonin in the brain are linked to elevated mood and general feelings of happiness and positivity, whereas low levels of serotonin are linked to symptoms of depression, including feeling sad, upset, more emotional/sensitive and general low in mood. We know that certain foods can help either boost serotonin levels or help with a more balanced release of it. One such food is complex carbohydrates, which cause a steady release of serotonin in the body. These types of carbohydrate trigger the body to release insulin, which then allows an amino acid called tryptophan to enter the brain, where it is then used to make serotonin. This is in stark contrast to white refined carbohydrates, which have been shown to have a negative impact on serotonin levels and also spike blood sugar levels too, which never makes us feel great on the come down! So make sure your diet is packed full of complex carbohydrates such as wholegrain foods like wholegrain bread & pasta, oatmeal, beans, brown rice, oats and certain cereals.

As mentioned above, the amino acid tryptophan is vital for the production of serotonin and has also been shown to reduce depressive symptoms and anxiety, and there are certain foods that contain this amino acid and which should therefore be a part of your diet to ensure a healthy happy mind. Many fruits and vegetables contain serotonin and tryptophan including pineapple, kiwis, bananas, tomatoes and plums. Pineapple in particular is a good source of serotonin, but levels are higher the fresher the pineapple is. This may be one reason why some studies have found that a higher consumption of fruit and vegetables in the diet is associated with better mental wellbeing. 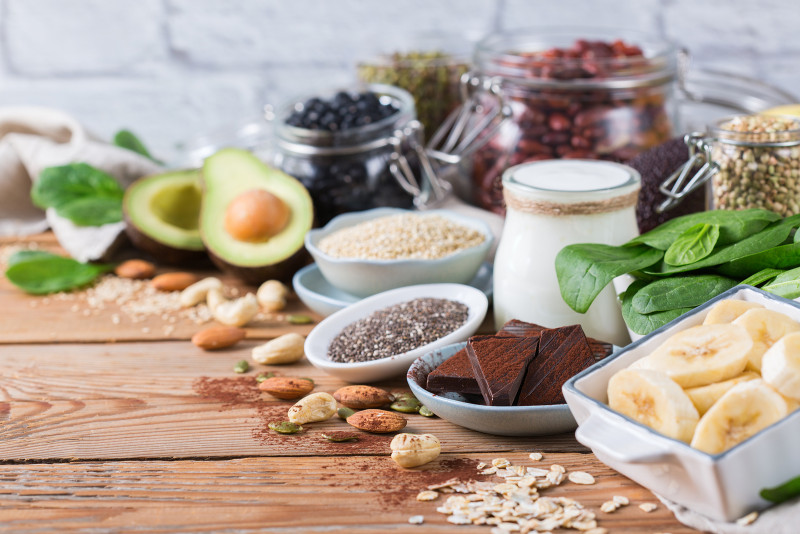 When we have a poor diet, this can also lead to deficiencies in certain vitamins and minerals too, some of which we know to play a very significant part in maintaining good mental health. One such mineral is magnesium, which is responsible for over 300 biochemical activities in the human body, so it goes without saying it has a massive importance for mental health. Science tells us there is a link between low magnesium levels in the body and depression and as magnesium has become one of the most common mineral deficiencies in the UK, it certainly can be very helpful in the fight against depression. Many studies have also found that this little mineral can also be very helpful in reducing anxiety based symptoms and research has shown that feelings of fear and panic were significantly reduced with increased magnesium intake. The exact reason why is still being explored, however we know that magnesium has a massive part to play in the release and uptake of serotonin and so helps in stabilizing mood. For this reason, people suffering with some mental health problems could well benefit from eating a diet high in foods that are rich in magnesium. Foods such as bananas, brown rice, spinach, figs, avocado, Brazil nuts, pumpkin seeds and mackerel, so try and have a little of one each day to help keep your mood high and your anxiety low.

We cannot forget the importance of B vitamins in the battle against mental health problems either. B vitamins are water soluble vitamins, which means that our body does not store these vitamins, so if we don’t have them in our diet we are not getting them at all. Research shows that many of the B vitamins play a vital role in maintaining positive mental health and if any of these are deficient then mental health problems can occur, or decline further. B vitamins impact the brain and nervous system directly, hence their ability to affect mental health.  Lack of B3 has been shown to lead to depression, lack of B6 can cause irritability, stress and depression. Lack of B9 has been shown to potentially cause or worsen anxiety and depressive symptoms, and B12 deficiency (more common in vegetarians and vegans as highest sources are meat and dairy foods) is also linked to depression, confusion and poor memory. This gives just a little taste as to the importance of B vitamins for mental health and a conscious effort should be made to include foods such as wholegrains, dairy foods and green leafy vegetables, which cover the spectrum of B vitamin 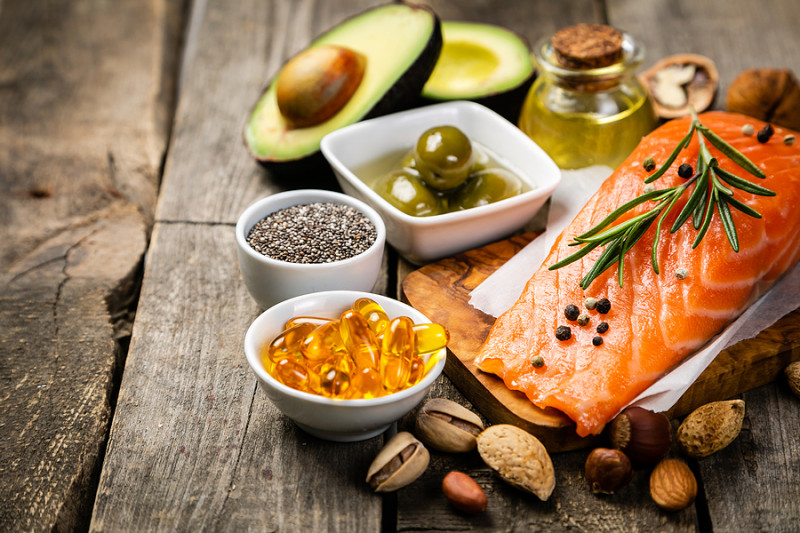 We also know that many people suffering with depression have low levels of omega 3 fatty acids, so eating more of them has shown to help improve mood. Although science doesn’t know yet exactly how omega 3 fatty acids improve mental health, we do know that they are essential for both healthy brain function and brain development and has excellent anti-inflammatory properties and possibly has an effect on serotonin in some way too. Guidelines suggest we should be eating two portions of oily fish a week such as salmon, mackerel, anchovies, herrings and sardines. Most people fall short on this so making some changes in your diet to make this achievable can really help benefit your mental health. And if you needed even more reason to add it to your menu, we know consumption of omegas 3s help guard against the development of Alzheimer’s disease and help preserve cognitive function as we age, so it’s definitely one to improve the aging process of our brains too.

So if you, your children, your partner, or someone else you know is struggling with their mental health, reviewing and making changes in your daily diet can have a significant impact on our mental health, especially in the long term. For young children and young adults, it is especially important to feed their brains with ‘premium fuel’ when they are young to ensure their mental health gets the best start in life. Remember, that between the age of 0 and 5 years is when our brains develop the fastest, so it is paramount in these early years of life to provide young children with the foods that help build a healthy brain and healthy mental health status for later years. It may not be the foods they always want to eat, but it’s the foods they will be thanking you for later!