Healthy Inspiration for the BBQ

The sun is out and we can officially be mingling in the gardens of family and friends again and the combination of these things lends itself to BBQs. This is still a favourable method of cooking when it comes to summer social get togethers, rustic tasty food and sunshine, but it’s easy to get stuck in our ways when we cook and that’s the same whether it be cooking in the kitchen or cooking alfresco. We are all guilty of buying and cooking the same type of of foods in the same old ways over and over again, leading us to sometimes lose our mojo, imagination and flare when it comes to food. But BBQs are a great way of experimenting with more with foods, and using food combinations that you may not have considered before. So if you are perhaps looking for a bit of creative, tasty but healthy inspiration for what you can be cooking on the barby this year then read on. 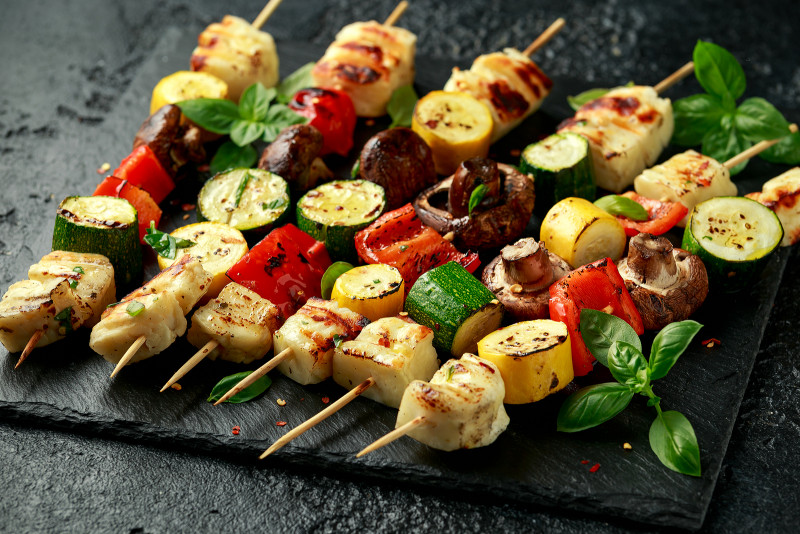 Kebabs really are fantastic for BBQs because you can make them from literally any food that can be put on a skewer or spit. Whether it be meat, fish, cheese or vegetables or a combination of all, kebabs are delicious on the BBQ and provide an excellent opportunity for children to be involved in their own food preparation too. Kebabs can be transformed by using marinades and these can be used on any foods and are super quick to make (from almost anything). Olive oil, honey, red wine vinegar, oregano and thyme, lemon and lime juice, garlic, maple syrup, sesame or peanut oil, red wine are all good staple and healthy ingredients for making marinades. Very little can go wrong here, so try experimenting to see which combined flavours you like the best. Again, this is a great way for children to be involved in the cooking process and is a similar method to making mud pies in the garden, but the end result is far tastier! 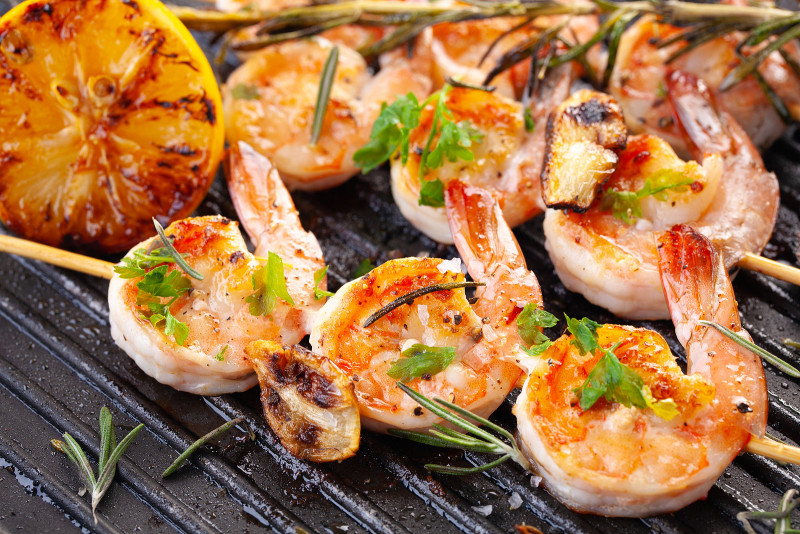 Tuna steaks are a fantastic choice for the BBQ as it is a really meaty fish, but does not take too long to cook.  Rainbow trout and mackerel are both a more fragile fish and unlike tuna, which can be placed straight on the BBQ grill, you are best to wrap this fish in tinfoil and then place on the BBQ, as it is so delicate it can fall apart when cooked. All these fish go well with a marinade of ginger, sesame oil/sesame seeds, lemon and spring onions and can be marinated easily for a couple of hours before cooking. Putting rainbow trout or mackerel in a tin foil parcel with these tasty and healthy marinade ingredients and placing the whole lot on the BBQ will really enhance the flavours as the fish cooks. Remember all these fish are classed as oily fish, meaning they are full of the all important Omega 3 fatty acids that are so important for a healthy heart, immunity and controlling inflammation in the body. Most people do not get enough Omega 3 so this is a great way of getting it into your diet. Sesame oil is a really healthy oil and is comprised of approximately 82% unsaturated fats, which are the fats known to help protect cardiovascular health and prevent heart disease. Research has also shown sesame oil is a powerful anti-inflammatory and in some animal studies has been shown to improve symptoms of arthritis, but more research is needed here.

Prawns are also a great fish to cook on the BBQ and best cooked on a skewer for ease. Any of the ingredients mentioned above in the kebab section could be easily used to marinade them, but another simple delicious way is by making a marinade with olive oil, fresh lemon and lime juice, garlic and a bit of Dijon mustard. Mustard has actually been used for centuries as a traditional remedy for a variety of health ailments and has been shown in some limited studies that it may have positive effects on blood glucose levels and inflammatory levels. Mustard also has anti-bacterial benefits too. 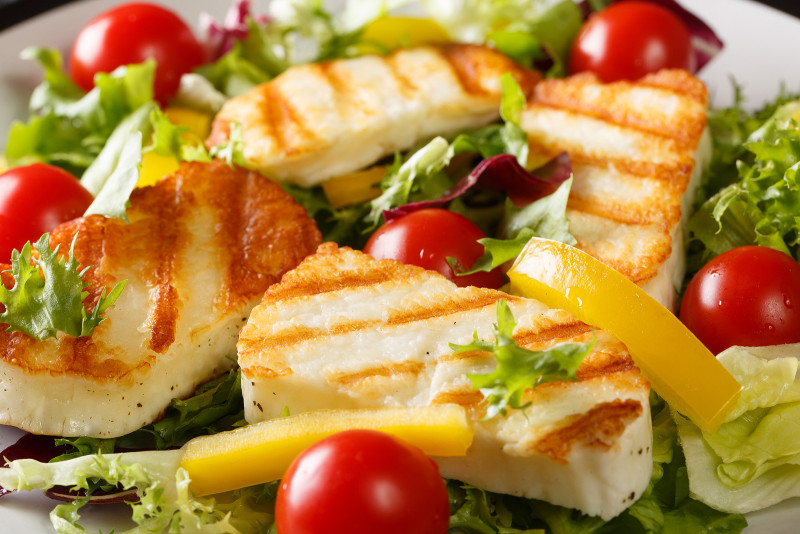 The best cheese to grill on the BBQ is of course Halloumi. This cheese is traditionally made from a combination of both sheep and goats’ milk, although it can be made from cows’ milk too. It is a Cypriot cheese so gives us a taste of holidays even though many of us will not be heading away this year. It tastes so good on its own you can put it straight on the BBQ grill, although I do recommend brushing it lightly with some oil first to stop it sticking too much. 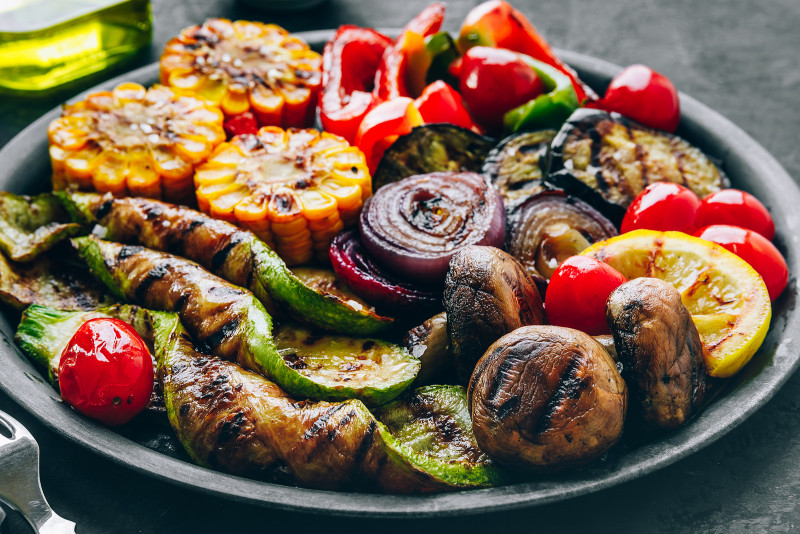 Most people will know that corn on the cob is a great food to grill on the BBQ and barbequing gives a slightly different taste to cooking in water on the hob. Corn is actually classed as both a vegetable and a cereal grain and is low in calories. Corn is also a good source of vitamins and minerals including vitamin C, magnesium, B vitamins and potassium and is a really good source of fibre, which is needed for a healthy digestive and cardiovascular system.

Now if we want to be a bit more exotic than corn, then I suggest asparagus. Asparagus is a nutrient packed vegetable that many people overlook in the supermarket, yet it is a very healthy vegetable, low in calories and a rich source of so many healthy nutrients including Vitamin A, C and K along with iron and zinc and many antioxidants, which are vital to protect your cells from free radicals (unstable molecules that can damage body cells). Due to it being a rich source of potassium, asparagus can be helpful in maintaining a healthy blood pressure and is also an excellent vegetable for digestive health, due to its fibre content. So it may make your urine smell funny, but it’s a small price to pay for the health benefits it gives.

When it comes to the colour purple many people don’t get enough of it in their diet. Purple fruit and vegetables offer a fantastic source of nutrients that are not as abundant in non-purple foods. Darker coloured fruit and vegetables essentially contain a higher content of antioxidants and other nutrients, making purple foods some of the healthiest out there. Aubergenes, part of the deadly nightshade family along with tomatoes and peppers, are often seen but not regularly eaten. They are very rich in antioxidants, specifically one called nasunin, found in the aubergine skin. Nasunin has been shown to be specifically beneficial for brain health as it has been shown to help protect the fats found in brain cell membranes and we certainly don’t want to be losing too many of those! Aubergines are also a good source of the vitamins B1, B6, potassium and magnesium, the latter of which many people can be lacking in.

Slicing aubergines long ways and brushing each side with a little olive oil then placing them straight on the BBQ grill makes for an easy, nutritious and colourful accompaniment to any BBQ. Other vegetables that you can slice easily and add straight to the grill include courgettes, peppers, tomatoes and sweet potatoes (the latter are best wrapped in tin foil). Remember marinades can be used on these vegetables. Try the delicious combination of red wine vinegar, lime juice, olive oil, honey, fresh thyme and oregano and leave the vegetables to marinade for a few hours before cooking. These marinade ingredients alone provide health benefits too for example red wine vinegar has anti-microbial properties and is also a natural probiotic so good for gut health. Lime juice is a great source of vitamin C and honey is high in antioxidants and research has shown it can be useful in upper respiratory infections, especially in helping coughs. So marinades are a good way of combining ingredients we usually only eat in small quantities. 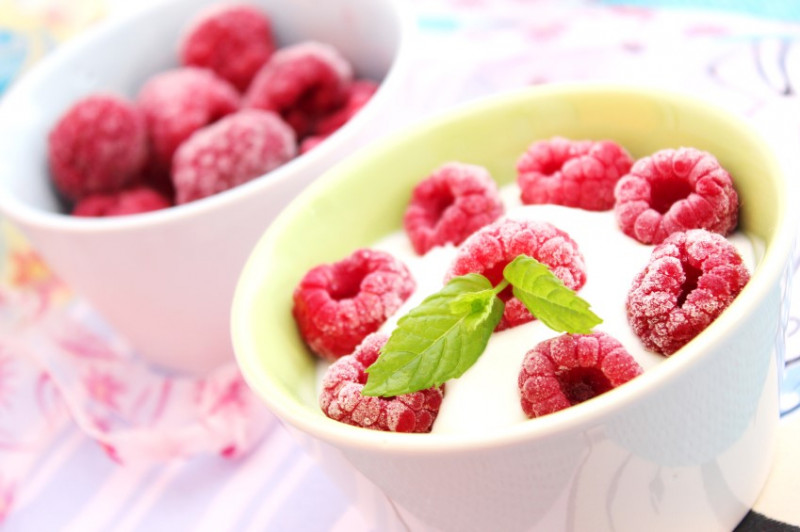 Now even with a BBQ you need a dessert and BBQ fruit skewers are the perfect choice. When we think of putting fruit on the BBQ, you may just think of bananas, which of course are a firm favourite amongst many, especially when covered in melted chocolate, but so many other fruits lend themselves to grilling. When fruit is grilled, the natural sugars present in the fruit caramelise and bring out a beautiful flavour to the different fruits. Many fruits can be skewered and placed on the BBQ including pineapple, strawberry, mango and cantaloupe melon, as well as banana.

So when you are planning a BBQ this year, don’t just stick to the usual culprits, branch out a little and try something new with your alfresco cooking.