The topic of mental health has certainly been attracting a lot of attention in the last year or two and is now no stranger to the spotlight. So what better time to shine some more light on this important issue, which affects us all, than Mental Health Awareness week taking place between Monday 13Th May to Sunday 19th May. This year’s theme is focused on Body Image, which is all about how we think and feel about our body. This important subject affects us all at some point in our life and if it’s not affecting you personally at present, it is highly likely it is affecting someone you know.

It’s important to define what is meant by the term ‘mental health’ as the phrase is being used more and more, yet it is easy to disregard it as something that affects other people and not yourself. Mental health encompasses a range of disorders to include depression, anxiety, stress, bipolar and schizophrenia, with anxiety and depression being the two most common mental disorders in Britain. The prevalence of mental health problems both in the UK and worldwide is huge and is a serious growing problem, with 1 in 6 adults having a mental health disorder in England alone. The complexity and individuality of mental health problems means that treatment of them is not a case of one size fits all and people often require a multi-faceted approach to treatment to help relieve and improve their mental health symptoms. However one thing that has shown in many research studies to help improve mental health is correct diet and nutrition, which has shown to play an important role in mental health status.

So how can diet and food impact our mental health? One answer is through the ‘feel good’ hormone called serotonin. Serotonin, known as the ‘happy chemical’ is found naturally in the body and affects many bodily functions including mood, appetite and sleep, and plays a role in many mental health related illnesses including depression and anxiety disorder. Low serotonin levels in the body have long been associated with low mood and depression, with many anti-depressant medications working by boosting the body’s serotonin levels.

The good news is that there are certain foods that can help raise serotonin levels naturally. These include carbohydrate rich foods such as brown rice, porridge, whole wheat pasta and bread and starchy vegetables. These foods trigger the body to release insulin, which allows an amino acid called Tryptophan to enter the brain, where it is then used to make serotonin. So if you suffer with mild mental health problems, adjusting your diet to include a good proportion of these types of food in your daily diet could well help.

Despite this being the fourth most abundant mineral in the body, it doesn’t quite get the attention it deserves in relation to its importance to health. It is responsible for over 300 biochemical activities in the human body, so it goes without saying it has a massive importance for mental health. Science tells us there is a link between low magnesium levels in the body and depression, and as magnesium has become one of the most common mineral deficiencies in the UK, it certainly can be very helpful in the fight against depression. Many studies have found that this little mineral can be very helpful in reducing anxiety based symptoms and also showed that feelings of fear and panic were significantly reduced with increased magnesium intake. The exact reason why is still being explored, however we know that magnesium has a massive part to play in the release and uptake of serotonin and so helps in stabilizing mood. 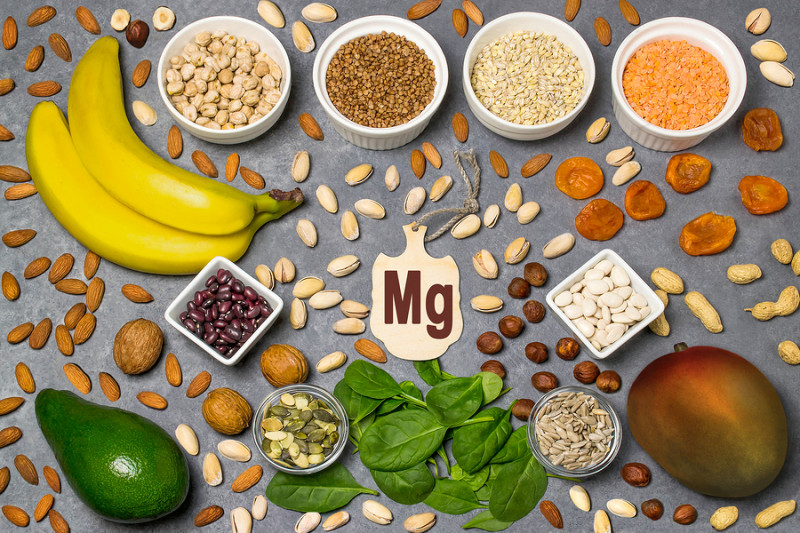 For this reason, people suffering with some mental health problems could well benefit from eating a diet high in foods that are rich in magnesium. Such foods include bananas, brown rice, spinach, figs, avocado, Brazil nuts, pumpkin seeds and mackerel so try and have a little of one each day to help keep your mood high and your anxiety low.

It has been shown through research that unequal intakes of omega-3 and omega-6 fats in the diet have a direct impact on mental health problems, including depression, concentration levels and memory problems. A few studies have even shown that increasing these fats in your diet can be helpful in the control of bipolar depressive symptoms. It therefore goes without saying that these fats should have a prominent place on your menu. Omega-3 can be found in oily fish (salmon, mackerel, herring, sardines, fresh tuna, anchovies and trout) as well as nuts and seeds. This is the fat that is also vital for improving brain power and mental clarity and has even been shown to improve IQ, so it’s a win win consuming this fat! Omega-6 can be found in grape seed and flaxseed oil, nuts such as pistachios and seeds such as pumpkin, sunflower and flaxseeds all of which can be added to salads or even put on your morning porridge!

The Mediterranean diet is not really a ‘diet’ at all, but a lifestyle of eating a healthy and balanced diet that includes a range of fresh foods including nuts, fish, olive oil, beans, fruit and vegetables. I know what you are thinking, a trip to the Mediterranean would definitely help improve mental health, but if that’s not possible, then the next best thing is to eat how they do in the Mediterranean. Studies have shown that consuming a Mediterranean based diet helps support optimal mental health by reducing the risk of low mood and depression. Although we can’t be certain exactly why this type of diet improves mental health status, it is thought to be linked to the fact that the Mediterranean diet is high in Omega 3 fatty acids and other nutrients that are often not consumed in the same amounts in our Western diet. A deficit of Omega 3 fatty acids in the body is associated with depression and according to some studies, you are more likely to suffer with persistent low mood and depression if you are not a fish eater, as your Omega 3 fatty acids are generally lower if you are not consuming it through fish.

The Mediterranean is also the land of the olive and is the place synonymous with olive oil, which is consumed regularly and widely in the Mediterranean. Olive oil has huge health benefits including helping to reduce depressive symptoms, so don’t be afraid to drizzle a little on salads, soups and bread to get a taste of the Mediterranean here in the UK.

These ‘risk factor’ foods have a detrimental effect on mental health in one of two main ways. Some foods can trick the brain into releasing neurotransmitters (chemical messengers that pass between nerves to send a message in the body) that our body can be lacking in. This release of neurotransmitters can cause an alteration and change in mood which is often temporary. Chocolate and caffeine are two foods which work in this way and alcohol also has this effect, and although they may give a temporary feeling of improvement in mood and mental health, often leave us feeling worse after the initial peak. Other foods can actually cause damage to the brain itself as they can prevent other foods successfully breaking down into the nutrients the brain requires to function healthily. The foods that cause this sort of damage include saturated fats such as animal fats, butter and palm oil. Studies have consistently shown that those people that consume a higher portion of these types of foods (commonly found in many processed foods) have poorer mental health and this is especially the case in children who consume these types of foods.

Mental health is a huge complex subject, which is only going to get more important as more and more people become affected by its grip. Improving your diet and selecting the foods discussed above, is one small way to address one aspect that is known to have an impact on mental health status. If you are one of the many people experiencing mental health symptoms and have not yet sought help, please contact your GP.

·        The role of diet and nutrition on mental health and wellbeing, 2017. Proceedings of the Nutrition Society

·        Mineral and vitamin content of goat's milk, 1984. Journal of the American Dietetic Association